Of this photo, Patillo said, “We nine students involved in the integration of Central High became a closely knit family with one goal – to survive.”

She meant this literally. She and the other students suffered physical and verbal abuse, while teachers looked the other way. Patillo was kicked down stairs, had acid sprayed in her eyes, was pinned against a wall and choked, and had flaming pieces of paper thrown at her by white girls who trapped her in a restroom stall. Minniejean Brown spilled a bowl of chili over a white boy who tripped her in December 1957 and was suspended by the school.

By the time James Lawson traveled to Little Rock, Arkansas in 1958 to meet the nine youth, they had endured months of this. Lawson met them in Daisy Bates’ living room. Bates was the head of the Arkansas branch of the National Association for the Advancement of Colored People (NAACP). The Little Rock school board had a plan to slowly implement desegregation in compliance with the Brown v. Board of Education of Topeka ruling by the Supreme Court in 1954. Bates wanted immediate desegregation of the schools, and began accompanying Black parents and their children to white public schools, where they were refused admittance. Bates applied more pressure by always bringing newspaper photographers along to document the schools’ response.

The NAACP recruited the youth for their good grades. They, and their parents, also had to give consent. But as Reverend Lawson knew, the nine weren’t prepared for the violence of the opposition. He asked the Little Rock Nine how they had been prepared to do this.

“At this point they had already been engaged in a fierce battle [at the school] from white students who had been recruited by the White Citizens’ Council backed by the KKK, and they were getting all kinds of harassment, physical, verbal and what not,” Lawson said. “When I asked them within the first minutes of our gathering, what were you told when you agreed to do this? Their response was, ‘we were told not to fight back.’ And I listened to this, and I was fundamentally outraged personally that you send students into a situation such as they have never known before and their parents have never known before. So I gently explained to them that that was the best way for them to talk to you, the NAACP orientation people, but what they actually mean is that you fight back, but not imitate the enemies who are trying to drive you out of the school. You fight back, but not by doing what they are doing to you. You fight back with your mind, your wits, your courage, and that fight will be more effective than if you swung your fist at them.”

“Then I explained to them that that was the meaning of the Montgomery Bus Boycott, which had ended maybe a year before. And I could see on their faces, a sort of waking up…Earnest Green and Minnie Brown said I saved their lives with that first session because they were terribly contorted with the admonition you must not fight back. I helped them to free themselves up to fight back but with other weapons.

That same meeting and I asked them, “What’s the worst thing that happens to you in school?”

“A boy would usually take a marble or stone and would wrap it in a piece of foil and throw it at me, and it really hurts.”

“So then I asked, what can you do the next time you get bombed? And I led them in a kind of brainstorming process went around the room and let everyone answer. There were a number of different suggestions, but the important thing is that when I returned to Little Rock a few days later, the same girl, Melba, said that when she had walked into her English class a bomb went whizzing by her ear from the back of the room. It missed her and hit the wall, and she was trembling, but she thought, What can I do? She walked over and picked it up, then walked 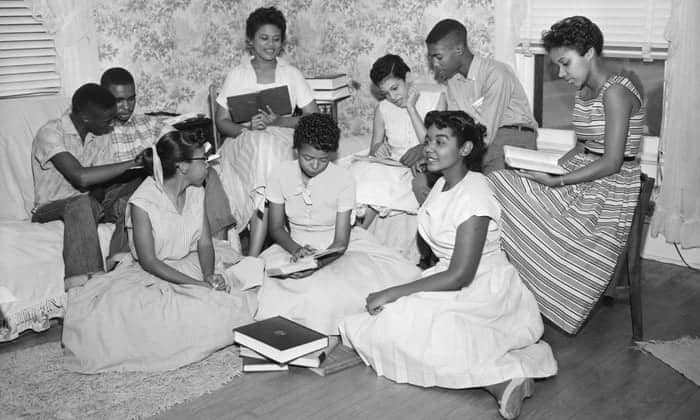 to the desk of the boy who threw it at her and set it on his desk and smiled at him. And he turned all shades when she did that. And she said several students around his desk saw that and laughed nervously. The next day, that boy greeted her at the door, “Good morning, Melba.” He never again harassed her or any other of the nine.”