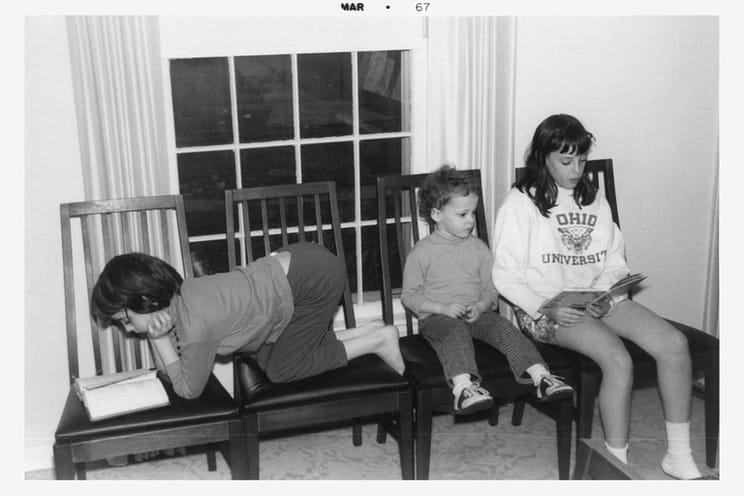 I learned to read in Mrs. Paul’s first grade class at Millikin Elementary School in Cleveland Heights, Ohio. I still recall how thrilled I felt when I successfully sounded out and spelled “b-e-c-a-u-s-e.” I had often seen this word flopping like a fish in the middle of a sentence, and being able to read it was right up there with riding a pony for the first time at Hiram House Summer Camp.

Once I learned to read, I read all the time. I read while brushing my teeth and spitting out the toothpaste, careful not to spatter the book. I read the label ON the toothpaste. I read while running the water for my bath, trailing one hand in the stream and letting the bathtub fill almost to overflowing so I could read longer. My big sister, awaiting her turn in the tub, would holler up the stairs, “Mare! I know you’re reading in there! Hurry up!” If I was bored by a lesson at school, I read surreptitiously, hiding my book behind a map of the world. I checked out 20 books from the library at a time, the most allowed, and read day and night, crouching by the nightlight in the room I shared with Prince Matchabelli Bikini, who sometimes talked in her sleep. At the end of the week, my parents drove me back to the library to check out 20 more books. I carried them in a tipsy pile to our white Valiant station wagon, and set them down on the roomy back seat. Luckily, my parents liked to read, too.

You might assume that I easily learned to read. That’s how I remember it, too. Imagine my surprise when my mother recently told me that I had trouble. However long it lasted, this period of trouble is a blank in my memory. At first, my mother told me Mrs. Paul tried to teach me to sight read. With sight reading, you look at the word you’re trying to read and take it in all at once, like recognizing someone’s face on an FBI wanted poster. Mrs. Paul used the Dick and Jane series, a popular reading series in the 60s that featured a boy named Dick, who always wore pants, and his sister Jane, who always wore a dress. I hated wearing dresses. I only wore one once a year, a frothy pink creation with a pink bow that tied in the back. My father posed me on the loveseat in our living room, in front of the wall with the bookshelves on them, and snapped my birthday picture.

My parents were bookworms, too. My father read to us every evening while my mother was out teaching night classes. He read us a chapter from Alice’s Adventures in Wonderland, and withstood our pleas to read one more.  He read us Alice in the Looking Glass, Grimm’s fairy tales, poems from Rudyard Kipling’s “A Child’s Garden of Verses,” Tom Sawyer, the Little Prince, Huckleberry Finn, Treasure Island, Charlotte’s Web, Winnie the Pooh, poems by Langston Hughes, and Little Women. Then I hit first grade, and my teacher tried to teach me to read using the Dick and Jane books.

I enjoy doing research almost as much as I like to read, and certainly more than I like to write if something I’m writing is giving me grief, as this speech did. And so I headed to the Central library downtown, and asked one of the children’s librarians if they had any Dick and Jane books. Ta-da! She found me three, in a spiffy reissue by Penguin Publishing.

Here is the front cover of “Fun with our Family.” 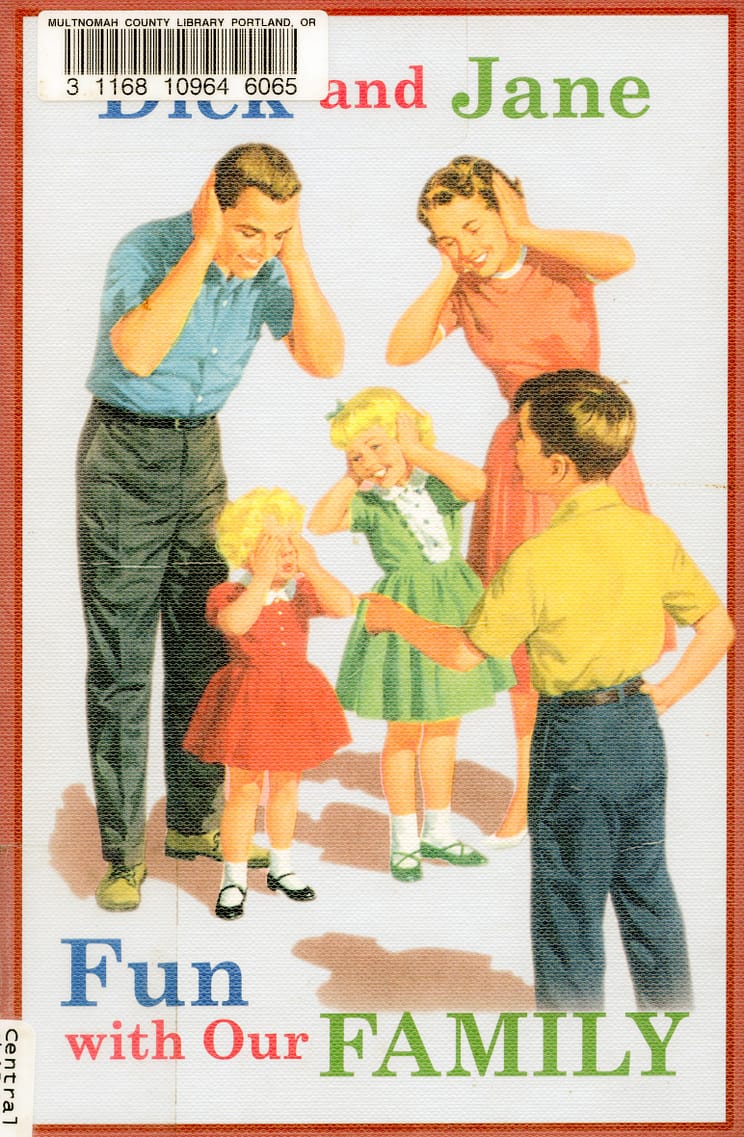 I’ll show you the back cover in a minute, and it’s even more fun than the front. Obviously some children learned to read from the Dick and Jane books, in fact, “generations of children” the preface to the reissue claims, but according to my mother, who remembers what I’ve forgotten, I wasn’t one of them. Go ahead and judge this book by its cover. Can you guess why I couldn’t learn to read? Here is the back cover illustration. 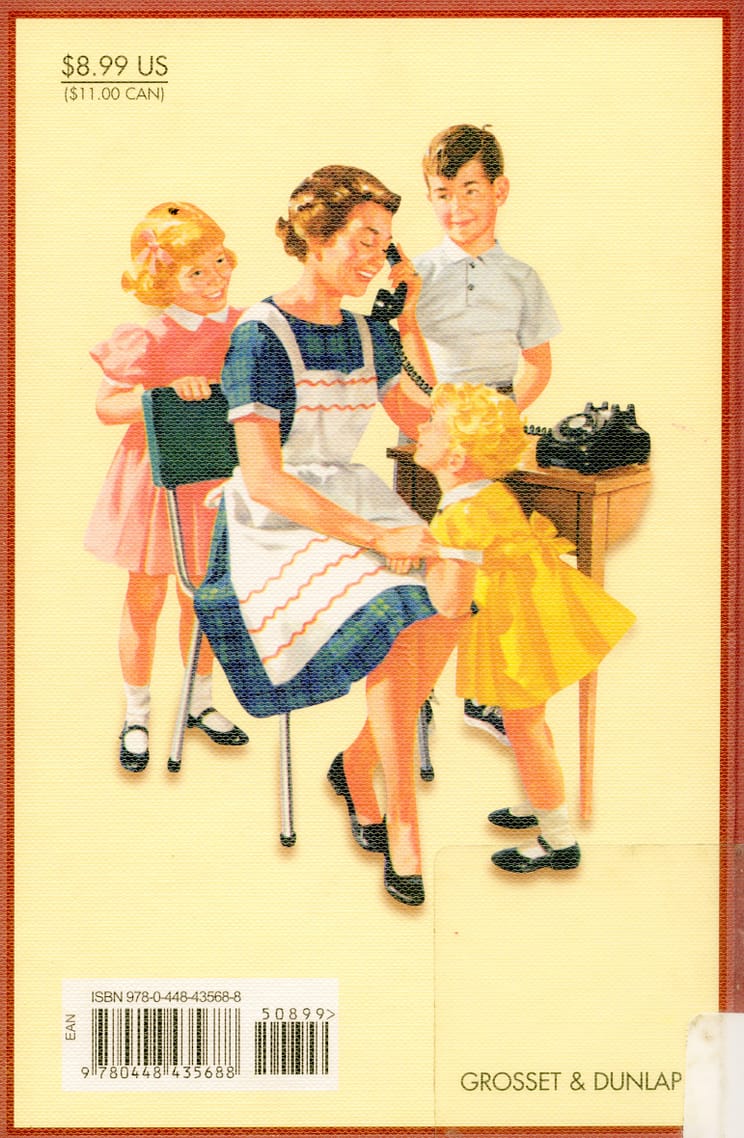 Mother is in her blue dress and red striped white apron, which reminded me of the American flag we kids pledged allegiance to each morning at school. Her three children are gazing adoringly at her. She must be talking to Father. Father is telling her, “I’m going to be home late from the office tonight.” Mother is saying, “I’ll keep your dinner warm.” I’m just making that up. I don’t know what Mother is saying, or who she is talking to. Nor did I find out what game the family is having fun with on the front cover. Could it be some type of charades?

The first page shows Dick and Jane’s dog, Spot, sleeping with his head on his paws. The text reads: Spot. Next page: Jump, Spot. Third page: Jump, jump! Fourth page: Oh, Spot!” Obviously I’m leaving out a description of the illustrations that go with this text, but I have the book here, and if you’re curious you can come up afterwards and take a look. Mrs. Paul tried to get me to read this and I came home and exclaimed, “But Mom! People don’t talk like that!” Mrs. Paul gave up trying to teach me to sight read, and taught me to sound out words instead. That’s when reading clicked. Instead of reading the Dick and Jane books, I could read books like my father had read to me.

At age 14, I decided that I wanted to be a writer when I grew up. I wrote a story set in the future about two archeologists who wander around the ruins of an amusement park without knowing what the rusted machines are and get trapped at the top of a Ferris wheel when it starts to move, and another about a ventriloquist whose dummy murders her after they perform at a child’s birthday party.

Reading made me a citizen of the world. It introduced me to other cultures, and inspired a longing for adventure. At age 16, I read “Full Tilt: Ireland to India on a bicycle” by Dervla Murphy, in which she wrote about cycling overland to India by herself toting a loaded pistol, and then scared my mother by telling her that I wanted to be a war correspondent, traveling the world. When I was 22, I traveled all over India alone by bus and train and rented bicycles, like my heroine, in some of the places I visited, notably the city of Tiruchirappali in the south, a city where I fielded my second marriage proposal, from a handsome young Iranian man stranded in India by the Iran-Iraq War. Many years later, I wrote about him in a story titled, “The Cup of the Ayatollah Khomeini.” I wrote it in an epistolary form to my Jewish grandmother b-e-c-a-u-s-e she had offered me a brand new car in exchange for turning down a marriage proposal from the third handsome man I met in India. I turned her down, but not him. Several years after I moved to Tokyo with him, my mother called early one morning, weeping. My grandmother had died in her sleep.

The opening to “Citizen of the World,” the keynote speech I delivered on Feb. 4, 2017, at Ooligan Press’ Write to Publish conference, on the Portland State University campus.

You can listen to the rest of the speech, on video, here.